Do We Need Psychedelics to Make Visionary Art? A Discussion of Creativity and Spirituality with Chris Dyer 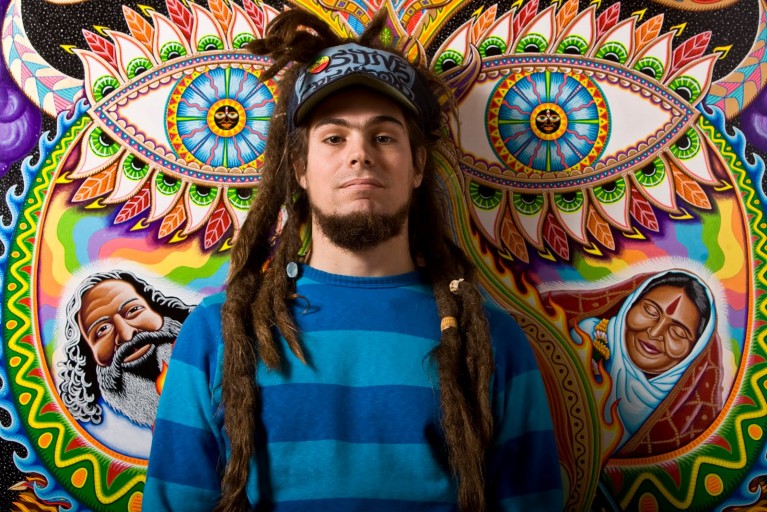 Earlier this month, I had the wonderful opportunity to interview visionary artist Chris Dyer, of Chris Dyer’s Positive Creations on Lucid Planet Radio. During our conversation, we touched upon many issues including Chris’ own artistic journey, his advice for how connect to your inner creativity, why the idea of the ‘starving artist’ no longer serves us, and Alex Grey’s assertion that ART may be the greatest unifying religion. You can listen to the entire interview HERE on Lucid Planet Radio.

We also discussed how the use of psychedelic substances and influences the creation of visionary art, as our emerging transformational culture has witnessed such an intersection of spirituality, creativity and psychedelics in the past 40 years or so. This is a common theme for discussion on Lucid Planet Radio, as we also touched on this the week before in my interview with author Graham St. John, about the cultural history of DMT. 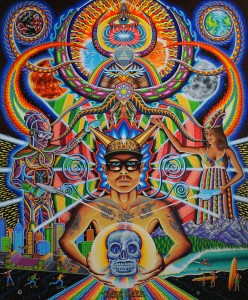 Take one look at Chris Dyer’s art, and you can’t help but feel transported to a magical alternative realm in some other psychedelic dimension. The fluid combination of bright colors, geometric shapes and imagery from a number of different spiritual traditions feels somehow alien, and yet incredibly earthy at the same time. There are many  who see Chris’s art, and say that it reminds them of visions that they had while tripping on psilocybin, Ayahuasca, LSD, salvia or DMT. And yet people can appreciate the depth, beauty and ‘trippy-ness’ without ever having tried psychedelics. 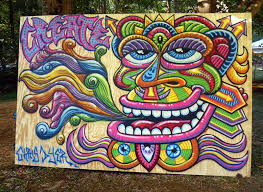 The way that Chris Dyer’s art can transport us to another dimension of space/time and then challenges the way we see ourselves and our world is very reminiscent of Alex Grey’s description of what visionary art DOES to us: It triggers the divine imagination, it encourages the development of our inner sight, and it allows to see through the eye of the soul.  Art changes consciousness as highlighted by future Lucid Planet Radio guest Jacob Devaney at Uplift Connect, and new research from UC Berkeley shows that art can even trigger physical healing right down to altering the chemicals in our immune systems. 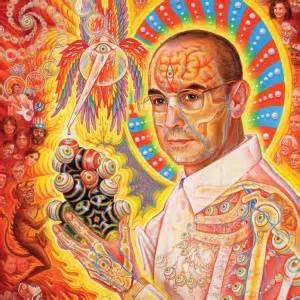 And yet in spite of all of these connections, Chris Dyer does not feel the need to turn to psychedelic medicine to find his creative inspiration. While he was a frequent recreational psychedelic user during his 20’s, Chris tells me that he has since developed a more ‘mature’ perspective about them as he moves into his mid 30’s, respecting the medicinal value and taking into consideration the intention, timing and dosage before engaging. We spoke about his recent travels to Peru to use Ayahuasca, not for intentions of other-worldly visions, but to heal his heart and to help cleanse himself of addiction.

So, does an artist need to use psychedelics in order to make visionary art?

Perhaps psychedelics can open the door to alternative realms of consciousness, but psychedelic use is certainly not a prerequisite for making to visionary art. When asked if he uses psychedelics for his creative inspiration, Chris Dyer explains:

“No I would not use psychedelics in order to find my artistic vision. I have used psychedelics in my personal growth, self-discovery and healing and then that reflects into my art. I’m not going to say, I have nothing to paint so I’m going to do some acid and see what kind of trippy stuff comes out.”

Chris used psychedelic mushrooms for many years when he was younger, and while he had fun, he says he never experienced the full depth of them until he used them with a focused intention. For Chris, it is important to be responsible and conscious with how we are affecting our minds and our consciousness. He explains that eventually, he just moved on, with a knowledge that he does not need to rely on any substance to be a creative person, that is just who he is (and, news flash: so is each and everyone one of you reading this!) In our interview, Chris equated the repeated recreational use of psychedelics to learning and going to class, asking, do you really want to go to fourth grade forever? 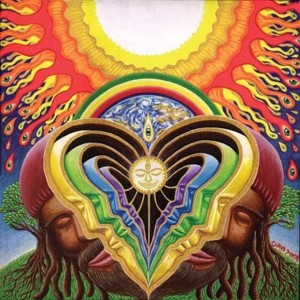 And yet, as we have learned from a number of visionary artists, most notably Alex and Allyson Grey, psychedelics can be incredibly beneficial in altering our state of mind and offering new insights of clarity, depth and personal growth. They can be inspiring, and the visions that people bring back from the psychedelic realm and translate to paint, canvas, graffiti and/or digital media (etc) really can make for fantastic art!  It has been argued that psychedelic use, when conducted in a conscious and present fashion, does seem to catalyze creativity.  There is even an online guide for how to use psychedelics (specifically LSD and psilocybin) to enhance your creative work!

The important thing, which Chris Dyer reminded me in our interview, is that we need to make sure that we are not depending upon any substance to make our art.  He used a great analogy that if you can’t make trippy art without psychedelics, that is the same as saying you can’t run a marathon without speed, or you cannot fall in love without MDMA. We might want to enhance certain experiences, but we definitely do not need to depend on anything outside of ourselves to be the creative people who we are inside. 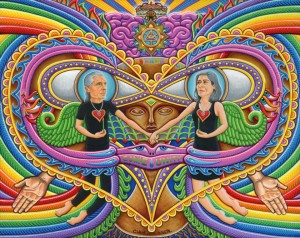 While there may be nothing wrong with engaging in behaviors to help stimulate your inner magic, Chris Dyer reminds us that “Everything is inside of us already to rock! Let’s try to find this magic inside ourselves!”

For more from Chris Dyer, including his advice for channeling your inner creativity, listen to our interview and check out all of his art on this website! LIGHT AND LOVE!