Why We Need to Keep Social Media in Perspective

No matter your usage of social media, please remember that it is only a TOOL. 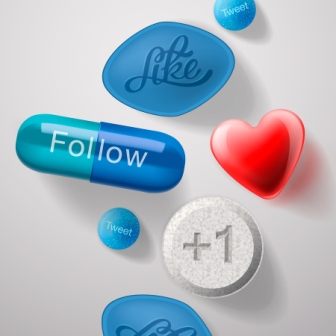 Social media has sure evolved since I was in high school fifteen years ago. Back then there was email, but there wasn’t the strong presence of online communities like MySpace, Facebook, Twitter or YouTube. My main experience was waiting for those high-pitched AOL dial-up noises to pass and having awkward chat room discussions with random strangers.

Fast-forward to the present day and social media seems to be an integral part of our identities, facilitating our daily interactions, feeding us information, dominating a lot of our screen time and energy, entertaining us, inspiring us, and sometimes, frustrating the crap out of us. Some people believe that social media is the greatest thing ever to happen to the human race, while others argue that social media is creating a more fragmented, disconnected society.

I try to see the light and dark in everything, and so I can appreciate the benefits and the harms of social media. It connects us in profound ways, building communities and spreading unprecedented messages of unity. But it can also waste our time and energy like never before, and worse, expose us to a level of conflict and abuse that would probably never happen in regular daily life.

I’m not here to judge social media or tell you that it is good or bad for humanity; that is really up to you to decide for yourself. I’m writing this article because I think social media and the way we interact with it can be strange and ridiculous, and many of us (myself included!) have fallen into the trap of taking it WAY TOO SERIOUSLY.

SOCIAL MEDIA IS JUST A TOOL

No matter your usage of social media, please remember that it is only a TOOL. It is a tool for communicating with people; a tool for promoting yourself; a tool for learning; a tool for finding things to do; a tool for watching entertaining videos or reading inspiring articles; a tool to further your career, and so on.

Social media offers us a vastly different reality than we are used in ‘normal life’ and this can become problematic if we start to take it too seriously, or if we think of it as more than just a tool. There are 5 reasons why we need to not take social media so seriously: People’s lack of inhibitions, the prevalence of trolls, how addictive it can become, the potential for FOMO and loneliness, and the increased likelihood of conflict to which it exposes us.

Perhaps the most obvious reason why we can’t take social media too seriously is that people have fewer inhibitions and tend to be way more open online than in face-to-face interaction. In other words, we are dealing with an artificially created virtual world and so the communication we experience will be fundamentally different and challenging to deal with. Called Online Disinhibition by psychologist Dr. John Suler, here are some of the mechanisms that reduce people’s inhibitions in social media interaction:

2)    Social Media Can Expose You to Nasty, Nasty People

It might sound a bit extreme, but you really can’t take social media too seriously because by using it, you are opening yourself up to some really nasty people. They hide behind the anonymity, invisibility and asycnhronicity of the web will the sole purpose of making hurtful comments, often purely with the intention of instigating arguments and conflict, also known as ‘trolling.’ Trolls will lie and exaggerate purely to get reactions and upset people.

A September 2014 survey of 1200 social media users published in Personality and Individual Differences showed that scores on the dark tetrad personality measures (sadism, narcissism, Machiavellianism, and psychopathy) were extremely high only among people who said that trolling was their favorite online activity. According to the researchers, “online trolls are prototypical everyday sadists.” They went further, saying that, “both trolls and sadists feel sadistic glee at the distress of others. Sadists just want to have fun… and the Internet is their playground.”

So if you are making any public posts or comments, there is a possibility you might get trolled, and if you are being trolled, it is most likely by sadists intending to hurt you for their own amusement. (Ever since I started writing online articles, this has happened to me more times that I care to acknowledge). Because these sadistic trolls gain pleasure from upsetting you, the best thing you can do is IGNORE their comments, do not take it personally and do not give them a reaction!

3)   Social Media May Be The New Addictive Drug of Choice

It is also important to keep social media in perspective because if you don’t, it might turn into a full-on obsession or addiction. According to Dr. Henrietta Bowden-Jones, psychiatrist at Imperial College London, about 5-10% of internet users are addicted, meaning they are unable to control their usage . Other statistics indicate that anywhere from 3-13% of people in the US express “symptoms of inappropriate internet use” although there is no clinical definition yet for social media addiction, or specific statistics on it at this time.

The ‘addictiveness’ of social media seems to come from the immediate gratifications and boosts to self-esteem that we receive from likes, shares, re-tweets and so on. Is our self-worth becoming intrinsically linked to these little bubbles that pop on the screen when we get a like, a follower or a message? It seems that way. According to one study, 62% of adults world-wide DO feel better about themselves after having positive interactions on social media.

But if social media is truly addictive, then we should see addictive brain and behavior patterns associated with it. And preliminary research shows that we do. A 2012 study in China used MRI scans to conclude that the brains of adolescents with “internet addiction disorder” closely resembled the brains of alcohol and cocaine addicts, both sharing disrupted pathways related to emotions, decision-making, and self-control.

Perhaps even more startling is the behavioral data related to compulsiveness and withdrawal. In a 2011 survey of almost 1000 college students across 10 countries, 4 out 5 reported “significant mental and physical distress, panic, confusion and extreme isolation” when they were asked to unplug from technology for an ‘entire’ day. To describe their experiences turning off social media, they used analogies like “going cold turkey” and “itching like a crackhead,” and even reported physical symptoms like panic attacks and heart palpitations. Plain and simple, fiending for Facebook like it’s cocaine is NOT healthy behavior.

4)   Thanks to FOMO, Social Media Can Make you Feel Lonely and Dissatisfied

FOMO (the fear of missing out) has become a very real and often very painful phenomenon thanks to social media. Now every time you cannot make it out to a concert, or you don’t get invited to a party, you get bombarded with reminders of how much fun everyone else is having while you’re sitting at home in your PJs watching Netflix. (When I decided not to go to Burning Man this year, for weeks my Facebook feed was absolutely inundated with posts, pictures, comments and the like reminding me what I was missing. I became so annoyed with it, I finally just unfollowed a bunch of pages and people to clear the space and cull the reminders).

FOMO makes us question our decisions about how we spend our time, it makes us question how we are living our lives, and it can make us feel lonely, bored and unfulfilled. Perhaps this is why so many people feel bad about their lives after using social media. German researchers have found that 1 in 3 Facebook users feel dissatisfied with their lives after visiting the site, prompting feelings of loneliness, jealousy and frustration. The most common trigger was feelings of jealousy from seeing vacation photos, followed by people who compared their number of social interactions (Why did SHE did get more happy birthday posts than I did!?)

So what is going on here? Are we masochists, to be so obsessed with something that can repeatedly make us feel so bad? Perhaps we continue using social media because we so desperately want to feel connected. But, as Dr. Sherry Turkle brilliantly argues in her book Alone Together, social media gives us the illusion of being connected, of being fulfilled by relationships and having so many ‘friends’ and conversations. Yet the true psychological depth and closeness of these relationships is often lacking, which ironically can actually make us feel even more alone.

Finally, we can’t take social media too seriously because conflict can arise so easily, sometimes out of nowhere, from nothing, for no reason! Internet trolling aside, all you have to do to end up in an argument is express an opinion and then wait for someone to respond! I believe it points back to online disinhibition and people’s openness to say things online that they wouldn’t say in person, and the fact that many of the people you encounter online are either feeling depressed, frustrated or jealous, or they are narcissists trying to make themselves feel better (there is after all a strong positive correlation between narcissism and social media use). Plus, online communication lacks the social cues, the body language and the subtle nuances of in-person communication, meaning people can often get confused or take things the wrong way.

Things that happen on social media can also bleed into our real-life relationships, creating conflict and destruction. I have seen couples arguing because someone accepted a friend request from a member of the opposite sex, and friends getting jealous of one another because one friend got more likes on a similar status update. I have even seen people break up or end relationships because of events that happened on social media. The list goes on. Suffice it to say, if social media is wreaking havoc in your actual relationships, you are probably taking it too seriously!