Will 2015 be the Year that the Feds Finally Legalize Medical Cannabis? 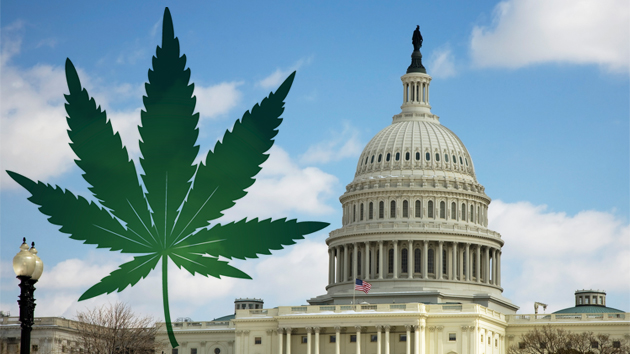 Over half of the American population now lives in states where cannabis has been legalized for medical use, including 23 states and Washington DC, with an additional 12 states offering provisions for CBD- dominant strains (CBD stands for Cannabidiol, one of the active ingredients of the cannabis plant, used to treat seizures and spasms). And yet, cannabis remains a Schedule 1 controlled substance, still completely illegal under federal law.

In a groundbreaking turn of events this week, a bi-partisan coalition of Senators has brought us one step closer to the federal legalization of medical cannabis with the introduction of the Compassionate Access, Research Expansion and Respect States (CARERS) Act. On March 10th, 2015, U.S. Senators Rand Paul (R-KY), Cory Booker (D-NJ) and Kristin Gilibrand (D-NY) introduced the CARERS Act, the first comprehensive medical marijuana legalization bill to be brought to the floor of Congress in U.S. history.

The CARERS act aims to address the many current problems with the clash of federal and state laws regarding medical cannabis, including reclassifying cannabis for medical use, allowing veterans to have access to the medicine, eliminating barriers for research, and overhauling the banking laws to allow state licensed business to have bank accounts.  Many advocacy groups including NORML, Americans For Safe Access, Drug Policy Alliance and Marijuana Policy Project helped in the development of the bill.

Even though medical cannabis businesses operate legitimately within state regulations and laws, the medicine is still technically illegal under federal law, putting both patients and caregivers at risk for federal prosecution. A big part of the problem is the continued classification of cannabis as a Schedule 1 narcotic, deemed to have no medicinal value (and to be more harmful than cocaine and methamphetamine!). The CARERS act calls for the reclassification of cannabis into a less restrictive category that would allow for research and offer protection under the law to the millions of Americans who use this medicine. Furthermore, most major banking institutions will not allow medical cannabis businesses to have bank accounts, because their business is still federally illegal. This discrimination makes medical cannabis a cash-only business, which can lead to potential public safety concerns and other challenges.

As co-sponsor Senator Booker says, “This bill we are introducing seeks to right decades of wrong and end unnecessary marijuana laws. Our federal government has long overstepped the boundaries of common sense, fiscal prudence and compassion with its marijuana laws. These laws must change.”

This argument is particularly convincing when we take into consideration the many sick children who benefit from the use of CBD-rich strains to treat epileptic seizures or spasm-related conditions. Doctor Sanjay Gupta’s “Cannabis Madness” 2014 documentary really tugs at the heartstrings… One can only imagine what these parents must go through, being forced to travel across the country, relocate, or risk facing social services or even jail time for giving their children potentially life-saving medicine. They deserve better than this!

Thanks to provisions included in the December 2014 Appropriations Act, the stage has already been set for the Federal Government to act logically and compassionately in the best interests of its people when it comes to the legality of medical cannabis. Buried deep inside this 1,600+ page document is a provision detailing that state approved medical cannabis patients, caregivers and business owners are no longer at risk for federal prosecution. While the Obama administration adopted this hands-off policy during the last year by calling an end to Federal raids of dispensaries in states that had approved medical cannabis programs, the passage of this law makes the change official. According to section 538 of the Appropriations Act, no Federal agency is allowed to use its funds to interfere in the implementation of state medical marijuana laws. This means NO more federal prosecution for patients, caregivers or business owners in states that have approved, licensed and regulated medical programs.

In response to the passing of this bill in December, Bill Piper, a lobbyist with the Drug Policy Alliance said, “The war on medical marijuana is over,” calling the move ‘historic.’

Even still, more needs to be done to protect medical patients, caregivers, and business owners, which is where the CARERS bill comes into play. It is challenging to obtain funding and conduct research with a Schedule 1 controlled substance, and difficult for veterans to gain approval use cannabis to treat their PTSD. The banking conundrum must also be addressed: If medical cannabis businesses are legally conducting business in their states, they should be allowed to use bank accounts like any other legal business.

In February 2015, two other cannabis regulatory bills were also introduced to the U.S. Congress that sought to include regulations for all cannabis use, not only medical use: HR1013 (The Regulate Marijuana Like Alcohol Act) and HR1014 (The Marijuana Tax Revenue Act). The first bill, introduced by Representative Jared Polis (D-CO) seeks to remove cannabis from the controlled substances act, and to revoke the DEA’s power over its possession, production and sales.

According to Rep. Polis, “Over the past year, Colorado has demonstrated that regulating marijuana like alcohol takes money away from criminals and cartels, grows our economy, and keeps marijuana out of the hands of children… It is time for us to replace the failed prohibition with a regulatory system that works and let states and municipalities decide for themselves if they want, or don’t want, to have legal marijuana within their borders.”

On the same day, Rep. Earl Blumenauer (D-OR) also introduced the Marijuana Tax Revenue Act, which seeks to impose a Federal excise tax on the sale of recreational (non-medical) cannabis, which would become applicable should Congress choose to end its prohibition. He explains, “together these bills create a Federal framework to legalize, regulate and tax marijuana, much like we treat alcohol and tobacco” which is becoming increasingly relevant as more and more states vote in favor of full cannabis legalization.

Speaking of full legalization, what is happening in Colorado, Washington, Oregon, Alaska and Washington D.C.? So far the Feds appear to be following a similar protocol to medical cannabis and staying out of state regulated policies and practices, but cannabis businesses in these states still remain almost entirely excluded from the banking system. And thanks to IRS section 280-E, which was passed by congress in 1982 to punish drug traffickers, cannabis businesses are not allowed tax deductions or credits for business expenses . Congress ruled in 2007 that this tax provision even applies to businesses that are operating legally under state laws, such as medical or recreational cannabis.

Another pressing issue in states with legalization is the need for cannabis lounges, as advocated by Keith Stroup, NORML legal counsel. In my home state of Colorado for example, cannabis is legal for adults over the age of 21, but the use of cannabis is regulated similarly to the use of alcohol: You cannot use it in your car, a park or in any public place. Many hotels also do not permit its use, or charge exorbitant cannabis fees to travelers who use cannabis in their rooms.

With industry tourism at an all time high, exactly where are visitors to Colorado and other states supposed to go to smoke or vaporize their cannabis? I recently paid a visit to Club Ned, America’s first ever fully legal cannabis lounge, located in Nederland, Colorado, and you can read my report on the experience here. Suffice it to say, they are providing an excellent service, and it would make logical sense that visitors and locals in states with full legalization have access to cannabis clubs in the same way that people who drink alcohol have access to bars.

So what does the future hold for the legalization cannabis in America? It is hard to say, but many activists are optimistic, as political attitudes appear to be moving in the right direction. There is more cannabis-friendly legalization circulating Congress than EVER before, and it has been receiving bi-partisan support. As Bill Piper, lobbyist for Drug Policy Alliance says, “The politics have really shifted…Congress has been slow to catch up with the states and American people, but it is catching up!”

If you’re not feeling excited yet about the potentials for cannabis reform, you probably should be! As NORML legal counsel Keith Stroup says, “It is a great time to be alive for a marijuana smoker. But our work is far from complete.”  If you are looking to support the continue movement for full Federal legalization, contact your elected representatives, and participate in the efforts of one of the many cannabis advocacy groups in your state, including Americans For Safe Access, NORML, Marijuana Policy Project, Drug Policy Alliance, Stop the Drug War, and more. Light and Love!