The Time Has Come for an Evidence-Based Cannabis Policy in the US, with NORML Deputy Director Paul Armentano 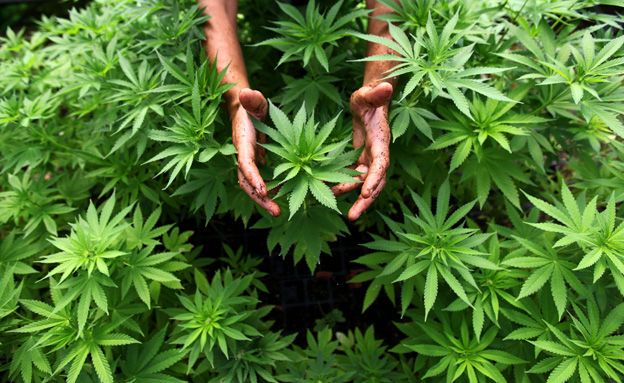 Last month on Lucid Planet Radio, I interviewed Paul Armentano, the Deputy Director of NORML (The National Organization for the Reform of Marijuana Laws) about the science, efficacy and political climate surrounding the legalization of cannabis. You can listen to the whole interview here!

It is certainly an exciting and unprecedented time to be a cannabis activist/enthusiast, as the public support for the legalization of cannabis is higher than ever! Here in my home state of Colorado, the benefits of legalization have been astounding, including $1 BILLION in revenue from recreational and medicinal sales in 2015, including $125 million raise in tax revenue last year with funds distributed to public education, behavioral health, law enforcement and youth prevention. Almost everyone agrees that legalization has been incredibly beneficial to the people and to the state.

There is More Support for Cannabis Legalization and Reform Than Ever Before!

As Paul Armentano mentions in our interview, the most recent polls tell us everything we need to know:

1. When asked if they support the ability of a doctor to authorize marijuana therapy to a qualified patient, 85-90% of public nationally say YES, doctors should be able to recommend marijuana- An overwhelming consensus.

2. When asked if states should have sole authority to set their own marijuana policies- 65%-70% of the public, across all different political ideologies say YES, wanting the Feds to butt-out.

3. When asked if in the most recent Gallup poll if marijuana should be legalized for recreational purposes, 58% of Americans say YES, including a solid majority in all groups 65 and under. These are the highest numbers since Gallup began tracking the question of marijuana legalization in 1969.

And yet the troubling part, which Armentano points out in our interview, is that ever since cannabis prohibition began in the 1930’s, the government’s bureaucracy has been entrenched around an incredibly damaging public policy position that has never had any scientific basis (and is practically archaic).

Continuing to maintain cannabis as DEA Federal Schedule 1 Narcotic flies directly in the face of a plethora of scientific research about its medical value. This classification compares it to drugs like heroin, saying it has absolutely “no accepted medicinal value.” This is contradictory and confusing, since more than half of the states in America have chosen to legalize cannabis precisely for its medical use, and four states plus Washington D.C. (Colorado, Oregon, Washington and Alaska) have already made this Schedule 1 Narcotic fully legal.

Debunking the “Not Enough Science” Rhetoric

Paull Armentano helps to maintain NORML’s extensive library  featuring over 250 clinical trials and pretrial studies on cannabis. The library contains the actual links to all of the studies, so you can read the studies for yourself and draw your own conclusions! He explains to me in our interview the paradoxical nature of the claims by policy makers and officials that there is “not enough research” and “more science is needed” to ‘prove’ the efficacy of cannabis as a medicine. This argument, he explains, overlooks three crucial facts:

1) Western civilizations have been using cannabis for spiritual, social and therapeutic purposes for thousands of years. This gives us a look into the potential long term safety and efficacy of the planet.

2) Cannabis and its active constituents are some of the most studied therapeutic components of modern times. If you go on to Pub-Med and type in “marijuana” you will find 22,500 citations to peer reviewed scientific papers, about half of those being published in just the last 10-15 years. And there are even more studies when you type in “cannabis” or other terms used for the plant. If you compare this to Tylenol, Ritalin, Ibuprofen or most other medications, you will find that there have been many more studies published on cannabis. Based on the available research, we can say with certainty that cannabis possesses safety and efficacy, as well as being subjected to greater scientific study and being used longer than the other substances it could replace.

3) The FDA offers 3 objective criteria used to determine safety profile of a psychotropic substance. These are the standards the FDA would use for new drugs that would come onto the market:

When we judge cannabis by these metrics, cannabis is not AS safe as other drugs it could replace, it is SAFER. It offers comparatively low dependency, no risk of lethal overdose and very low levels of toxicity.

The Importance of the Endogenous Cannabinoid System

We also talked at length in our interview about the body’s endogenous cannabinoid receptor system, which is significant not just because it exists, but because it has evolved to point where it is now a regulatory system. As humans, we have more cannabinoid receptors than opioid, GABA or any other receptors, and in fact, this is the densest receptor system in any living organism! The amazing part is that the goal of the endo-cannabinoid system is physiological homeostasis. This system has a bi-phasic effect, meaning that it will respond to environment, and consistently try to find balance and maintain good health.

We know that throughout our lifespan, our body produces compounds to interact with the endogenous cannabinoid system. What makes the cannabis plant unique is that it is only the external compound that we are aware of that so closely mimics the compounds that our body produces naturally. This is why it offers such a wide range of potential symptom and disease modifications.

While the Western paradigm of medicine tends to involve identifying and isolating single therapeutic molecules and bringing them to market to treat a particular system, cannabis offers much more than this. It is a botanical agent with in excess of 100 unique biologically active constituents that posses an affinity to the endogenous cannabinoid system. This process happens all through the body: We have receptors in our skin, our GI, our brains, and so forth. So rather than taking a single molecule acting for a singular purpose, this is a botanical agent with multiple agents acting holistically on the body.

Armentano tells me that cannabis has the greatest efficacy when all of these different constituents are administered in combination. He calls this “The Entourage Effect,” that the sum of the parts is more effective than the isolated components. And yet, there has been so much focus on isolating individual molecules like CBD or THC, with some states legalizing only certain parts of the plant for medical use. But when looking at totality of existing research, there is far greater evidence to date of the efficacy of herbal cannabis as a whole than just one singular cannabinoid.

Vaporizing: The Best Way to Deliver Cannabis to the Body

The best way to deliver cannabis has to do with the person’s motivation for using cannabis. For rapid onset of relief, inhalation is necessary, because it allows the effects to happen very quickly and offers a greater ability to self regulate the dosage. Vaporization appears to be the most sensible because it eliminates much of the adverse side effects of combustive smoke and appears to be the most efficient delivery device. Clinical trials have shown that vaporization leads to the highest concentration of cannabinoids in the blood, giving users the biggest “bang for their buck.”

However with inhalation methods, the duration window lasts approximately 1-3 hours, which might be too short for some people. Oral administration of decarboxylated cannabis has a much longer therapeutic window, but this comes with a delayed onset as well as increased bio-availability, meaning there is a tremendous variability of effect in how the body metabolizes it. Even the same person ingesting the same strain on a different day can experience a wildly different effect thanks to how the body, and especially the liver, breaks down cannabinoids. The liver metabolizes THC and turns much of it into 11-hydroxy-THC, more psychoactive compound which for many can feel dysphoric. When people inhale cannabis there is much less of this conversion happening, and much more of a consistent of effect. For more on this, check out this article from the NORML library.

The Efficacy of Cannabis for Pain

Cannabis has been shown to treat a wide variety of symptoms, ailments, and diseases, but Armentano believes one of the most fascinating is its ability to treat chronic neuropathic pain, something notoriously difficult to treat. He tells me that opioids, the most commonly prescribed medication for pain, are actually quite poor at treating neuropathic pain.

The fact that patients are able to use cannabis adjunctively to reduce or mitigate opioids, or replace them all together,  really speaks to the healing power of the plant and how important it is for many people who are suffering. This a huge benefit to society, not by only helping patients manage pain, but by reducing the public health burden associated with opioid abuse and mortality!!

And yet, there are actually states are lobbying to keep chronic pain/pain management OFF of the list of qualifying conditions for medical cannabis by arguing that it will expand the patient pool to sizes that are too hard to manage. This is completely inconsistent with the evidence, and speaks to a wider problem for the future: Does it serve us to say that some people are “healthy enough” and that they should therefore be denied access to the plant?

Where is the Future Heading?

I asked Paul Armentano where he thought all of this was heading, and what was important for 2016 and beyond. He said that for society to appropriately embrace and even exploit the therapeutic potential of cannabis, it needs to be in an environment where the plant is itself is LEGAL as opposed to carving out a niche for only some people who can have access (as in earlier, saying some people just “aren’t yet sick enough” to be allowed to experience the healing properties of the plant). Until that happens, we will not be able to fully understand and come to terms with therapeutic utility and potential for the plant.

We also talked a little bit about some of the most interesting cutting edge cannabis research happening right now, including those showing that cannabis use is correlated with fewer instances of metabolic syndrome and a lower prevalence of diabetes. This includes a healthier blood sugar, lower BMI and lowered risk of heart disease. New research like this continues to trample upon the already defunct stereotype of the unhealthy “stoner” who ate all the munchies, and it reminds us that we have only just begun to explore the potential health applications of this plant!

There are a number of a states where full legalization will be on the ballot in the November 2016 elections. These include heavy hitter California, Arizona, Massachusetts, Maine, Nevada, Michigan, Missouri, Ohio and more. To find out how to get involved with what is happening in your state, visit the NORML State Info page to see their interactive map and more.

As far as creating the a fully integrated supportive environment for cannabis research, it is obvious that our political leaders, especially at the Federal level, appear to be lagging behind what scientists and the public have already figured out about cannabis. America is beginning to set an example for the rest of the world, and we are doing so through joining grass-roots organizations like NORML, campaigning at the state and Federal level, and through voting on state ballot initiatives in the upcoming elections. The time has come for the people to push this forward by choosing to actively get involved in our own LIBERATION!

For more about Paul Armentano, and to find out how to get involed, visit NORML.org!