Why Are Witches Portrayed Riding Broomsticks? A Psychedelic Theory 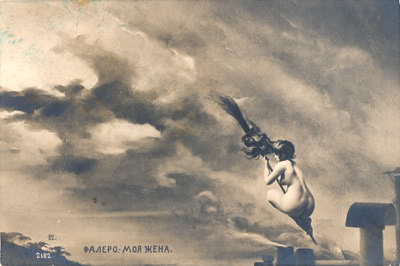 While watching one of my favorite Halloween movies last night, Hocus Pocus, I started wondering why witches are always portrayed riding broomsticks. Is this randomness? Or based on some historical fact? My research led me to the strangest and most unexpected theory: Witches riding broomsticks might actually be related to bread, specifically rye bread, and the hallucinogenic fungus that grows on it called Ergot.

During the Middle Ages and the Renaissance, much of bread made in Europe was made with rye. The fungus ergot that grows on rye bread can be lethal in high doses, and yet in lower doses it can produce vivid hallucinations and was thought to be responsible for the ‘dancing mania‘ reported through Europe from the 14th to 17th centuries, where people danced in the streets speaking gibberish and foaming at the mouth until they eventually passed out. Ergot has been used for centuries as a hallucinogen, and in the 20th century Albert Hoffman synthesized it to create LSD.

Perhaps the quest for the psychedelic experience is just part of human nature, as accounts indicate that people have used hallucinogenic substances called tropane alkaloids derived from plants for hundreds of years, including those made by Atropa belladonna (deadly nightshade), Hyoscyamus niger (henbane), Mandragora officinarum (mandrake), and Datura stramonium (jimsonweed), which may have had effects similar to contemporary psychedelics like cannabis and LSD.

According to pharmacology professor David Kroll, “salves” “ointments” and even “witches brews” were concocted using these hallucinogenic plants, possibly for sorcery and witchcraft (or possibly, just to get people buzzed). Indeed, it has been theorized the ‘witches brews’ of yore may have been nothing more than pharmacological concoctions designed to help the body better metabolize hallucinogenic substances.

So what does this have to do with broomsticks?

Well, these old-school psychonauts were smart enough to realize that orally ingesting the liquid form of these tropane alkaloid extractions could lead to all kinds of unpleasant side effects such as nausea, vomiting and skin irritations. But the  side-effects could be avoided by absorbing the compound directly through the skin’s mucous membranes, bypassing the rapid metabolism of the liver and the intestinal discomfort that followed.

And what were the most effective mucous membranes for absorbing these psychedelic ointments? You guessed it: The armpits, and the genitals.

So, these crafty day trippers (or maybe night trippers?) borrowed a simple home tool which they could cover with their psychedelic balms for maximum absorption into the armpits and genitals: The broom, as detailed in this photograph of a witch, her ointment, and her broomstick, from M. J. Harner’s Hallucinogens and Shamanism, via Alastair McIntosh:

Professor Kroll sites some early writings detailing the anointment of oils to a broomstick before use, including the 1324 investigation of the case of Lady Alice Kyteler:

“In rifleing the closet of the ladie, they found a pipe of oyntment, wherewith she greased a staffe, upon which she ambled and galloped through thick and thin.”

And from the fifteenth-century records of Jordanes de Bergamo:

“But the vulgar believe, and the witches confess, that on certain days or nights they anoint a staff and ride on it to the appointed place or anoint themselves under the arms and in other hairy places.”

But were these ointments truly hallucinogenic in nature? Without digging up some ancient evidence, it is impossible to know for sure.

Still, the concept of “flying” on a broomstick takes on a whole new meaning then when we imagine a woman using a broomstick to rub hallucinogenic ointment into her armpits and vagina. After all, even in modern times, the terms “flying” or getting “high” are often used to describe the psychedelic experience. Professor Kroll reminds us that tropane alkaloid hallucinogens in particular tended to cause sleep, but with dreams that involved flying, “wild rides,” as well as “frenzied dancing.”

Megan Garber also argues in The Atlantic that the broom was chosen as a psychedelic salve application tool over any other household item because of it’s placement in pagan rituals. Specifically, the Witch’s broom is one of the few tools that is seen as a balance of Divine forces. It is both part of masculine energies (the phallic handle) and female energies (the bristles).

Of course, this is all just one big theory, and there is no way to know for sure the true history of the ‘witches brew’ and broomsticks (although conjecture sure is fun!). Still, I can’t deny that the theory is strangely intriguing, and it is certainly interesting to question the traditions and rituals that we so often take for granted.

What do you think about this theory- Is it just a bunch of Hocus Pocus?! (I don’t know if I will ever look at that movie the same way again!)