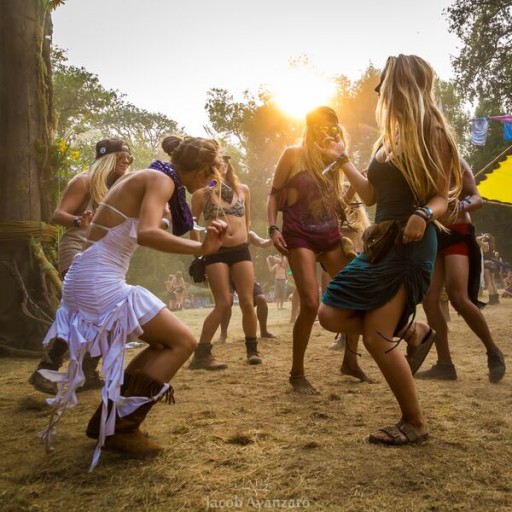 I started writing this article about a week after Enchanted Forest Gathering 2015 and I’m still riding high on good vibes from what was one of the friendliest, most relaxing festivals I have ever attended.

What made the energy at Enchanted Forest so especially comfortable and easy? 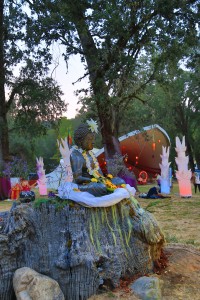 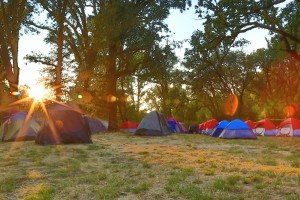 Some of the people I spoke to speculated that it was the strict “no alcohol” policy that helped keep people in a calm, compassionate and receptive state. Others thought it was the environment: Beautiful oak trees, a river that we could swim in (naked!!) and sacred, comfy, squishy chill spaces throughout. Or maybe it was the all-night music lineup at the dance temple, featuring beautiful melodic bass sounds designed not for aggressive raging, but for sensual contact dancing (more on that later!). 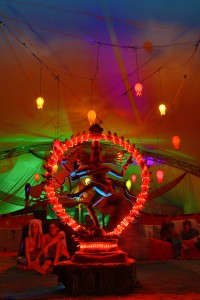 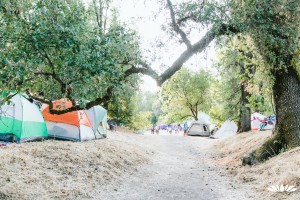 For me, it was a combination of all these factors that made Enchanted Forest 2015 the ideal intimate festival. While there is so much to talk about, the three things that really stood out to me were the sacred spaces, the emphasis on uniting the divine masculine and divine feminine, and of course, getting down to the music. 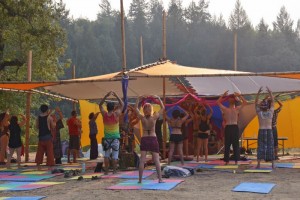 Enchanted Forest provided ample amounts of sacred space, from the comfortable vibes of the nectar temple, to the serenity of the crystal dome, to the ‘Chakra Garden’ and to the undeniable squishiness of the ‘sanctuary of squish’. 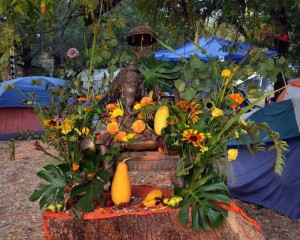 It was fun to wander into the nectar temple to find people practicing aerial silks, only to come in another time to discover DJs and yoga, or earlier in the morning, people meditating or asleep. 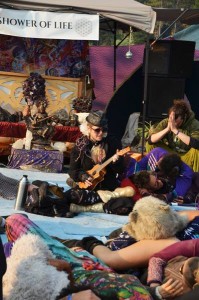 Even the shower party was off the chain when I went in there on Saturday evening (complete with neon light-up waterbed!)

One of the best parts about the sacredness of this space was how safe it felt. Unlike other events, children could frolic freely, both in and out of the designated ‘kid zone.’ It was great to see so many families at Enchanted Forest and see so many children having such a wonderful time.

We definitely have the opening and closing ceremonies to thank for helping to keep the vibes high and the interactions open and respectful.

During the Friday night opening ceremony (pictured below), we sat together as a collective and called in our guides, our ancestors and guardians of the land from the four corners of the globe. This is a powerful practice that seemed to bring everyone into flow together. 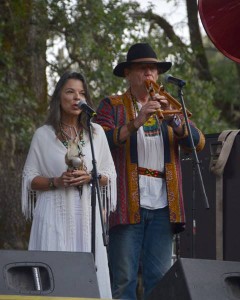 Sacred space also applied not only to the environment created by the festival, but also to the stance on the sacredness and sanctity of our physical bodies. As a strong supporter of the #freethenip campaign, it made me feel joyous to see women able to freely wander the event with their breasts on display (a point of contention and conflict at other transformational festivals I have attended.) 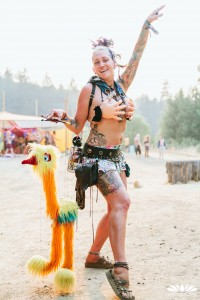 At one point on Sunday afternoon, I found myself bathing in the river enjoying the river stage with a bunch of other revelers- some naked, some partially clothed, some children, some adults. I sat there in conversation rubbing river mud all over my naked body. 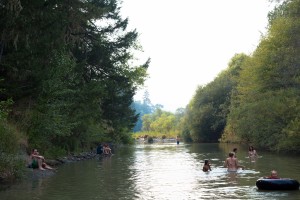 When I returned to dance away the sunset at the main stage, it felt as if I had just been nurturing myself at a spa! 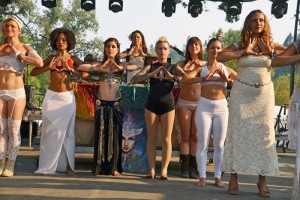 One of the components of the festival that helped me drop into such a chill space was the ongoing dialogue on masculinity and femininity: Instead of emphasizing tension or separation between genders, the content at Enchanted Forest really helped to emphasize harmony and healing. Workshops like Robert Allen’s “All men are sexual healers,” Ron Nadeau and Toni Bernbaum’s Sacred Masculine circles and Sacred Feminine circle 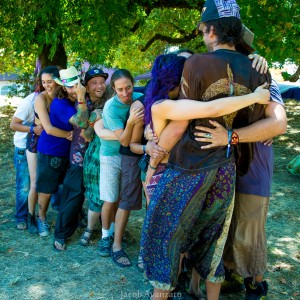 and Bonz Blessit’s “Hugs” workshop (pictured right) were all about finding that sense of comfort and unity in ourselves and in each other (If you haven’t had a bonz hug yet, you need one!!!) 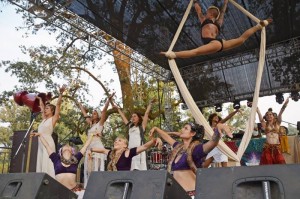 Feminine medicine’s breathtaking performance on the main stage (pictured above and left) really helped to bring this dynamic into focus.

Both the Polyamory 101 workshop that Jimi Ohm and I offered (pictured below), as well as Robert Allen and Lasara Firefox Allen’s Conscious Open Relationships workshop also emphasized the sacred unity of the divine masculine and feminine through communication, respect and ethical practices. 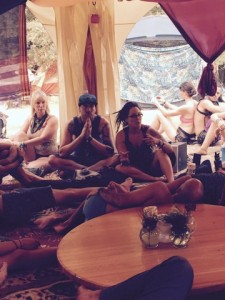 One participant (please email me if you read this sister!) made a beautiful comment about the integration of these energies as healing to the self, specifically that the masculine and feminine parts of herself are constantly falling in love with each other, more and more deeply, over and over again: A reflection of the perfect, divine, infinite dance of the yin and yang happening within us all. 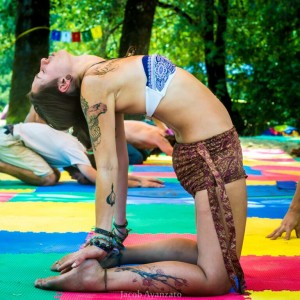 No review of Enchanted Forest could be complete without a mention of the fantastic music line-up and the sexy, fresh, intimate dance moves I observed (and learned to participate in!). I was told that this style of dance is referred to as “contact improvisation” and I was directed to some of the workshops being held in the Dance Temple during the day (pictured below). This style of dancing is all about noticing the points of contact between bodies and then exploring them through improvisation. 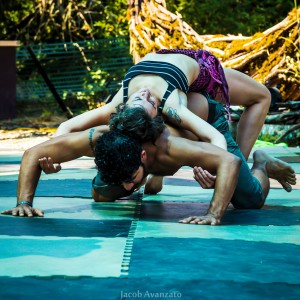 I noticed that unlike other festivals, the music at Enchanted Forest seemed almost intentionally geared towards this style of movement. Here are some of my musical highlights with SoundCloud links!

On Friday night in the dance temple, Oneness aka Wayne Stickler offered us a musical feast of trippy, moist down-tempo grooves to sooth the soul and stimulate the mind. It was during Wayne’s set that I witnessed my favorite contact dance moment of the festival, where two handsome guys and a beautiful woman danced together while lassoing each other with a rope. 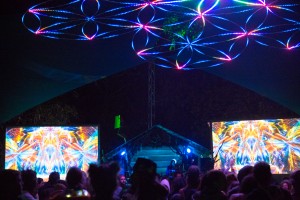 Deya Dova followed, and blew me away with her on-point vocals and stunning intensity. She opened with my two favorite tracks, Footsteps in the Stars and Symbiotic, while her 11 year old daughter danced and performed (I found out later that this was her daughter’s first ever festival!) 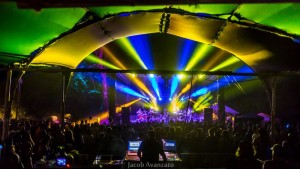 As a self-confessed Basshead (!!!!) Saturday night on the main stage was an absolute treat with An-ten-ae, Liquid Stranger and Koan Sound crushing it back to back. An-ten-ae, true to form, went hard with his signature ‘acid crunk’ style, mixing beautiful female vocals over dynamic funky bass-lines. Liquid Stranger’s set featured nearly all of his crowd favorites remixed in unique ways, as well as some new material, reminding us why he is one of the most popular DJs in the bass scene right now. 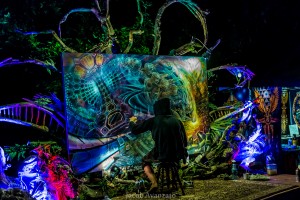 The crowd at the main stage was packed, but still respectful and giving space to dance freely.  I was SO excited to hear Koan Sound bring their signature haunting melodic DNB, and drop a few tracks off their fantastic new Forgotten Myths EP. We were treated to a host of beautiful performances as well, both on and off the stage, including fire fans, lots of sexy twerking, hooping and fire poi. I definitely lost myself in the bass! Lucid Planet obtained this brief clip of some dope fire dancing during Liquid Stranger’s set: 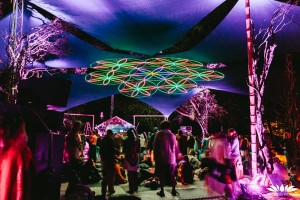 Sunday night really brought things home, with ‘old school’ legends Ott and Papadosio performing on the main stage followed by Moon Frog, Mr. Rogers, Sixis, and The Human Experience. While many people said they had seen Ott and Papadosio play at several other festivals over the years, the crowd was completely captivated seemingly moving in sync. 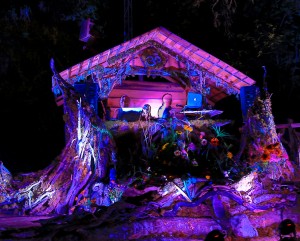 Later on in the dance temple, Moon Frog aka Bartow Mills brought his deep melodic downtempo grooves which were the perfect way to follow Papadosio’s closing of the main stage. Mr. Rogers followed this upping the tempo a little with some funky, glitchy dance vibes. Sixis aka Ben Wyss then brought it hard with his signature psychedelic deep bass grooves. 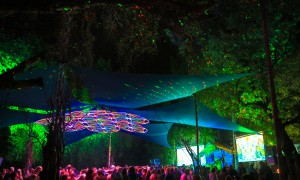 I even caught the start of David Block’s the Human Experience right after Sixis, which was hauntingly beautiful and melodic, but at that point I needed some sleep after a pretty action-packed weekend. 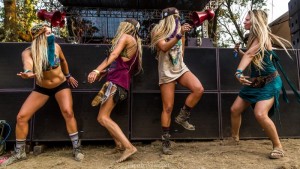 Even with the sacred spaces, the harmony of masculine and feminine, and the music, this event would never had captured such magic if it wasn’t for so many beautiful and dynamic people from all walks of life! I have to thank photographers Karl Baba, Jacob Avanzanto, Bartow Mills, Dancing Flower Photography and Mary Hall for capturing these incredible shots of the beautiful people of Enchanted Forest, some of which you can find in the gallery below.

Dr. Kelly and The Lucid Planet will be taking a hiatus from festivals until 2016. Hope to see you next year! In the meantime, please get in touch and share your festival experiences! Light and Love!